#GBSummit returns with two days of content and networking designed for industry executives.

After the disappointing Warcraft III: Reforged, I wondered if I really wanted a Diablo II remake. When Blizzard announced Diablo II: Resurrected earlier this year, I wanted to remain skeptical. It felt a little better learning that Vicarious Visions, which created fantastic remakes for Crash Bandicoot and Tony Hawk’s Pro Skater, was working on the project. Still, I was worried Blizzard would mess things up again.

Now that I’ve been playing a bit of Resurrected, I feel better. Blizzard has launched a PC technical alpha that runs through the weekend. It gives access to the first two of the game’s five acts. I can play as three of the seven classes: Barbarian, Amazon, and Sorceress. It’s only for single-player, so we can’t try out online multiplayer.

The full game comes out later this year for PlayStation 5, Xbox Series X/S, Switch, PlayStation 4, and Xbox One along with PC. And I’m going to let myself be excited now. 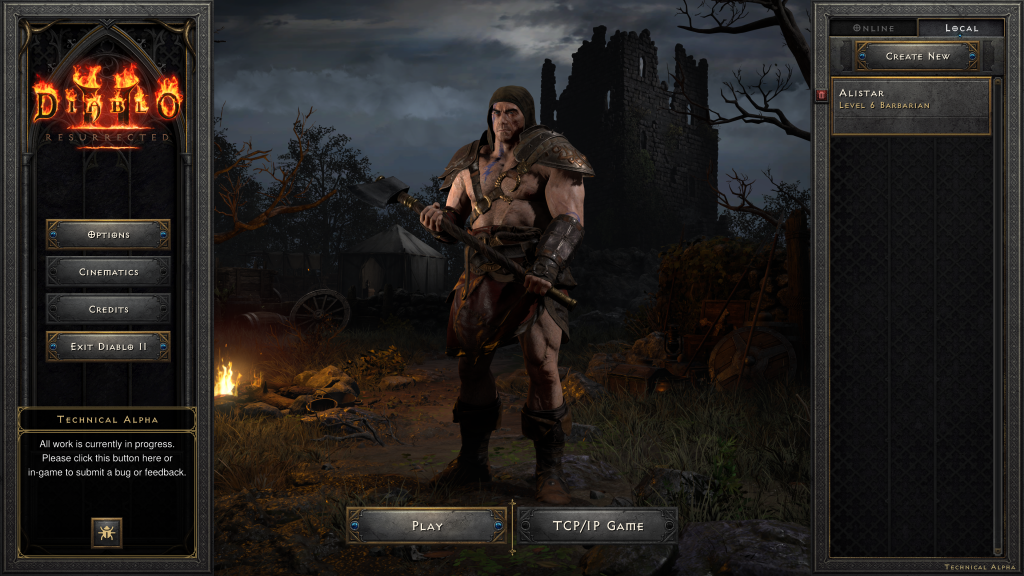 Above: Seeing this guy makes me feel like a 13-year-old again.

I love the original Diablo II. I played it back in 2000 and had an incredible, dark adventure with my Barbarian. Heck, I still remember the giant, orange-glowing bastard sword that I found toward the end of Act 2 that I ended up using for most of the game. I recalled the dozens of times I had to use a scroll of teleportation so I could go back to town and buy more health potions during my fight with Diablo. It’s one of my favorite game experiences.

That was a bit more than 20 years ago. Starting Diablo II again, everything came back to me. When I was in town but my health wasn’t full, I suddenly remembered that I had to talk to a specific NPC in the camp if I wanted to be healed. I began organizing my equipment the same way I did in 2000, putting my tomes on the far right slots and leaving the far left area for new loot.

It’s all an incredible wave of nostalgia. But Diablo II is more than that. It’s still a great game. It’s less flashy and slower than many modern action-RPGs, especially when compared to Diablo III. But that works in its favor. Yes, your inventory space is extremely small. You will not be spamming dozens of special abilities with dazzling particle effects during fights.

Combat, especially early on, is simple. You click on enemies and swing your weapon at them. As far as I can tell from my memory, it’s the same as it was in 2000. You have a stamina bar, and it limits how often your character can run instead of walk. Diablo II is restrictive. But it works. It just feels a bit more gritty than what we’re used to today. It doesn’t hold your hand and go out of its way to make things easy for you, which makes your victories feel more satisfying. 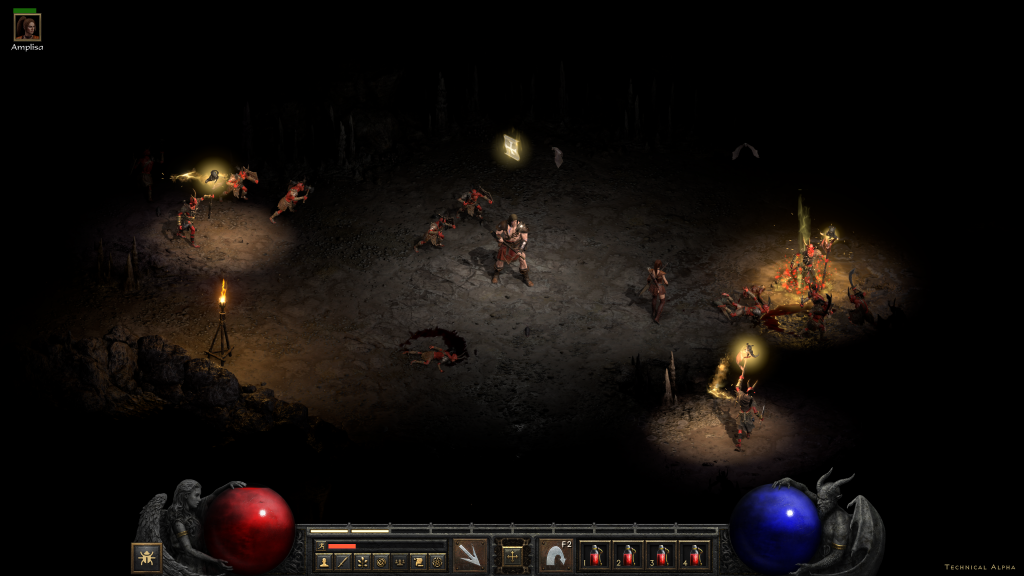 Above: Never thought that a place called The Den of Evil could be so comforting.

So, yes, Diablo II was great, and it’s still great. But we’ve seen Blizzard ruin a classic before with Warcraft III: Reforged. Thankfully, the effort appears much more polished this time. Resurrected looks updated while retaining the spirit of the original. It’s still a dark, dreary world. It’s just less pixelated and jagged. And if you like your jagged pixels, which I know I do, you can still switch to the old graphics by pushing a single button. I spent a lot of time going back and forth between the two, having fun comparing the old characters with their updated looks.

There are also some nice quality of life changes. The transparent map, which used to take up most of the screen, now nestles itself in the corner. You can still have it use the full screen if you want, you adorable purist you, but I like it just fine in its new position. Resurrected also has an option to have you pick up gold automatically when you walk over it. That’s nice. I mean, who ever doesn’t want to pick up gold?

Performance hasn’t been perfect. My framerate has suffered when loading new areas. It also drops when I’m standing on a waypoint. Of course, this is a technical alpha, so I’m not all that worried about it.

There’s a reason so many people had been asking for a Diablo II remake. It’s a special game. It’s something that I probably should have replayed on my own years ago. This remake just gives me a good excuse to do so.

This is just a sample, but it’s a promising one. Resurrected isn’t just bringing back a classic. It could also help revive Blizzard’s retro gaming credentials.

GamesBeat’s creed when covering the game industry is “where passion meets business.” What does this mean? We want to tell you how the news matters to you — not just as a decision-maker at a game studio, but also as a fan of games. Whether you read our articles, listen to our podcasts, or watch our videos, GamesBeat will help you learn about the industry and enjoy engaging with it. How will you do that? Membership includes access to:

This cockpit-style simulator will make your VR experiences more immersive

[embedded content] Are you a virtual reality fan, who wishes the whole experience could be made even more immersive than it already is? Do you have the cash to throw down for a gaming chair that looks like something a Star Trek captain or James Bond villain would sit in? If so, you may be […]

Players are exploiting Black Ops 4 emotes to peek around corners

Enlarge / In first-person view, you’re staring at a wall. With the third-person emote camera, you can see what’s coming around that corner. Twitter / GameSkinny The first-person perspective in shooters usually brings an inherent kind of balance to the constant battle for cover—if you peek your head out to see an opponent, they’ll be […]

Note: This was a rather sly but fun April Fools’ joke from Wccftech. Fun to imagine though! While gamers are still struggling to get their hands on Nvidia’s latest GeForce RTX 3000 series graphics cards based on the Ampere architecture, Nvidia is already hard at work on the successor to the flagship RTX 3080. Powering […]

Max Verstappen wants to win Le Mans – virtually, that is

iCloud might be sending your photos to strangers’ computers